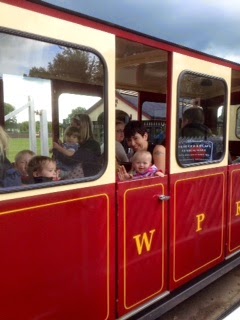 Last Friday we took part in the Barnardo's Big Toddle 2014.  A sponsored toddle had been organised by local magazine, Time for Tots at Wicksteed Park.  Prior to the event I created an online sponsorship form.  I took along four children. Between them and their parents they raised £165 for the charity. Anyone who raised £10 or more received tickets for a free ride on the park train.

We had a lovely day, it was just a shame that the awful weather cut it short. I promised the children that I will take them back to Wicksteed soon.

Email ThisBlogThis!Share to TwitterShare to FacebookShare to Pinterest
Labels: Days out, Newsletter items for parents of children in my care., Special Events