Making a Car for Hodgie and Puddles 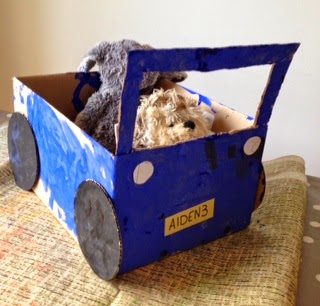 I had recently spent some time with one of the children (he is three years old) looking at Pinterest on my phone.  We were initially trying to find a rhyme or song about firemen.  We came across a fire engine made from a card board box.

Later in the week an order arrived from Amazon, the box it came in looked perfect for making a model.   Childminding has made me a hoarder, I am always stashing away bit and bobs that might come in handy for arts and crafts.

I reminded the little boy about what we’d found on Pinterest.  I suggested that he could make a model fire engine or even a car for his cuddly toys (they often come with him to play).  He wanted to make a dark blue car, I suspect because his Mum’s car is this colour.   He sat painting while singing away to himself.  I helped to cut out the windscreen and make a number plate.  The little boy did all the painting, he chose where to put the wheels and stuck them on himself.  We looked at a van parked outside to find out where the number plate and lights needed to be and he carefully glued them onto the car.  When his Mum arrived he was so excited to show her what he had made for his toys, Hodgie and Puddles.

I am now on a mission to find some bigger boxes, I wonder if the child would like to make a car that he can sit in himself.
Posted by Michelle at 18:30 No comments: