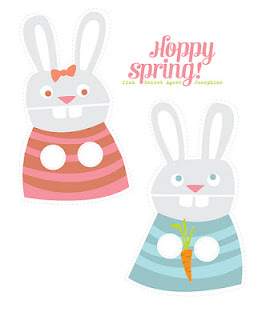 I found a template for some cute little bunny finger puppets on Secret Agent Josephine’s blog.   It can be printed  either ready coloured like the picture or in black and white.  I have some printed and cut out ready for tomorrow.  The children can colour them then we’ll laminate them to make them stronger.  I’ve got some double sided sticky pads that we can use to attach a cotton wool tail to the back of the puppet.

We often attend the Rhyme Time sessions at a local library.  They’ve recently introduced some new songs, one being, ‘hop little bunnies’.  The children all lie down and pretend to be sleeping bunnies.  When promoted, they wake up and hop like bunnies.  I’ve searched for the lyrics so we can sing while making our puppets:

The weather has been unseasonably warm for March.  Each day this week we’ve played outside.  Our pet bunny, Sherwood (named after the rabbits at Center Parcs) has come out into his run to play too.  I keep trying to get a photo of him but he appears to be camera shy!

Update: The cotton wool tails didn't work.  They kind of fell part and became loose.  Might be better to try pom poms next time.
Posted by Michelle at 12:12

Email ThisBlogThis!Share to TwitterShare to FacebookShare to Pinterest
Labels: Easter, Newsletter items for parents of children in my care., Songs and rhymes